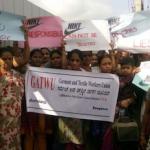 In February Nike launched its “Equality” campaign, professing its commitment to diversity and inclusion. On July 29, students and workers held a Global Day of Action in 25 cities across 12 countries to tell Nike: we’re not buying it.

Workers in garment factories producing Nike apparel say the company’s up to its old tricks, by barring independent inspectors and cutting production from unionized plants. Members of garment worker unions and allies demonstrated in India, Bangladesh, El Salvador, Spain, and eight other countries.

In San Pedro Sula, Honduras, members of the SITRASTAR union [1] led a demonstration outside their factory and the neighboring Nike store. According to union leader Waldin Reyes, 350 union members had lost their jobs the month before when Nike pulled production from their factory. Reyes led chants of, “If there is no peace for us, let there be no peace for them.”

In the U.S., students channeled that spirit as they demonstrated at Nike stores in Boston, San Francisco, New York, Portland, Houston, Chicago, and more. Actions included store blockades, the classic “I’d Rather Go Naked Than Wear Nike” action, where students strip to their underwear, and spirited pickets.

Demonstrators had three demands: that Nike restore production in the STAR factory in Honduras, that it fix labor violations at the Hansae factory in Vietnam, and that it commit to access to its supplier factories by independent inspectors. This last demand is at the heart of a campaign launched by United Students Against Sweatshops (USAS) [2] in 2015.

LET THE MONITORS IN

That campaign began almost two years ago in response to a strike at the Hansae factory, which produces apparel for U.S. colleges.

The Worker Rights Consortium [3], the independent monitoring organization, requested access to Hansae to inspect working conditions. Since the WRC’s founding in 2000, Nike had not questioned its access to supplier factories. The WRC’s very first inspection was of a Nike subcontractor in Mexico [4], and Nike representatives had even driven WRC investigators to factories on occasion. This time, though, Nike refused to let WRC inspectors in.

This decision by the world’s largest sportswear brand shocked students, garment worker unions, and advocates in the international anti-sweatshop movement. When Nike then went on to deny the WRC access to any of its 690 supplier factories, activists feared the undoing of one of their strongest tools for accountability and transparency in the garment industry.

The WRC is the world’s only independent labor rights monitoring agency and accepts no funds from corporations or unions. Thanks to years of campaigning by students, more than 190 colleges [5] have designated the WRC as their monitor for working conditions in the factories that produce their apparel. Access for WRC monitors has become a priority for these schools, as their only means to know the conditions under which their apparel is produced.

Together with partner garment worker unions in Central America, Sri Lanka, India, Cambodia, and other countries, USAS called for solidarity and action. USAS locals on more than 30 U.S. campuses led campaigns to pressure their universities to cut their multi-million-dollar contracts with the brand unless Nike committed to allowing WRC access. After months of campaigning and negotiation, Nike granted the WRC conditional access to Hansae, and in December 2016, the WRC released its report on conditions there.

The conditions discovered were some of the most severe in the WRC’s history of inspections: mass faintings, illegally high temperatures, wage theft, forced overtime, and the systematic firing of pregnant women. Nike’s own inspectors had been regularly auditing Hansae for over a decade and had reported no labor violations in that time. Given Nike’s self-reports of no violations, activists argue that this case shows the WRC is the only source they can trust for uncompromised reporting of health and safety violations, union-busting, and other abuses.

One Hansae worker, who spoke with a USAS representative soon after the report, recounted workers’ experience with inspectors. “When Nike came to the factory, we had to keep our heads down and say only nice things about Hansae,” the worker said. “We were told over and over that if we said bad things about the factory, we would be fired.” According to that same worker, the WRC’s eventual access to the factory was “our chance for people to know what it was like to work [at Hansae]…and do something to change it.”

Reaction to the report was immediate. Two days later, USAS-affiliated students at Georgetown University launched a 36-hour occupation of the university president’s suite to demand that Georgetown end its licensing agreement with Nike unless the corporation guaranteed full WRC access to its factories. Georgetown agreed and let its agreement expire later that month when Nike would not meet the condition.

Student pressure had already led Rutgers University to end its $150 million sponsorship deal a few months earlier. Then in March of this year, the entire University of California system strengthened its policy so that all licensees were required to give the kind of unfettered access to monitors that Nike was denying. Soon after, Cornell University and Northeastern University ended their license agreements, costing Nike what USAS estimates to be well over $45 million in potential revenue and royalties.

As the academic year ended with the fight over contracts raging on campuses across the country, USAS learned of yet another alarming action. Nike had pulled production from the STAR factory, a union plant producing collegiate apparel in El Progreso, Honduras. USAS’s International Campaigns Coordinator, Angeles Solis, describes Nike’s action as classic “cutting and running”: brands shifting production from union to non-union factories in response to worker organizing. More than 350 union members lost their jobs.

For many students, the Global Day of Action offered a chance to learn the potential of organizing and direct action. Georgetown sophomore Taylor Davis helped organize a picket outside Nike’s D.C. store, her first time organizing such an action. Davis said of Georgetown and other universities, “as institutions with such great power and influence, it should be an obligation of theirs to lead by example.”

Nike responded to the Global Day of Action by asserting it never had and never would cooperate with the WRC, despite its long history of permitting WRC access to Nike factories.

Now activists are looking toward September 1, when a licensing agreement between Nike and the University of Washington will expire if the issue is left unresolved. According to Solis, USAS is energized from the Global Day of Action and ready to keep fighting.

“Nike thought they would get away with cutting and running while students were away for their summer,” said Solis. “Nike is attempting to turn back the clock on over 20 years of fundamental labor rights. The country’s largest student-labor organization is committed to ensuring that doesn’t happen.”

Kory Stuer is a member of United Students Against Sweatshops Local 9 at Georgetown University.