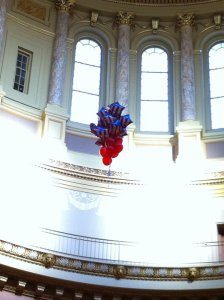 As I write to you from inside the Wisconsin State Capitol, the jubilant cacophony of tens of thousands of peaceful protesters both inside and surrounding the building is echoing off the walls.  People have arrived on this Saturday from all over the state of Wisconsin – firefighters from Eau Claire and Green Bay, teachers from every corner of the state, steelworkers, iron workers, municipal workers, police, teamsters, nurses, graduate students, and their friends and families.  Solidarity caravans of people have come from Illinois, Washington state, Iowa and elsewhere to support the people. All have descended upon the state capital of Madison to defend the rights of working people to organize and bargain on their own behalf – not just in Wisconsin, but across the country and across the world.  The showing it Madison is the civics lesson you had in elementary school in action.  As the chant refrain goes, “This _is_ what democracy looks like!”

Yesterday, State Assembly Democrats attempted to deliver a message to Governor Walker showing a good-faith willingness to negotiate.  Despite this fact, the intransigent governor refused all negotiations. Meanwhile, in the Assembly, the Republicans reconvened earlier than advertised and began taking illegal votes without the presence of the Assembly Dems, ignoring years of precedence and the simple common courtesy for which people of this state are renowned.  Just another attempt at bullying and ramming these shocking measures through the Legislature without discussion and without debate.  You can watch the incredible video of these events here, and here, as Minority Leader Barca and Rep. Hintz take these bullies to task on behalf of the tens of thousands gathered outside.

Meanwhile, it has now come to light that Walker’s bill was motivated, orchestrated and funded by out-of-state national big money interests: specifically, the Koch Brothers – the same pair behind the funding of countless faux-“grassroots” Tea Party actions, PACs and front groups for their ultra-right-wing agenda (see the full report here).  This comes as no surprise to us in Wisconsin, of course; this bill has the unmistakably dirty profits-before-people stench to it so recognizable to the people across the country who continue to foot the bill for the unrepentant greed and unstoppable cruelty of the ruling oligarchic class.  Their hunger is seemingly insatiable, and Wisconsin is clearly seen as a test-bed for these tactics, as they are poised to roll out nationwide.

Simply put, these actions have left no doubt: Governor Walker and the Republicans in the Wisconsin State Legislature are motivated not by their own fiscal responsibility towards the citizens of this state, but by the goal to break organized labor throughout the state.  They are starting by vilifying the public sector unions, but they certainly won’t stop there; the private-sector union rights are most assuredly on the chopping block, and any social services of any sort will be destroyed, too, under the guise of fabricated financial “crises” and so-called “austerity” measures.  The goal is corporate welfare, and those that will pick up the tab will be the working men and women of this state, and this country.  It’s a move out of the “Shock Doctrine” playbook, and it was clearly orchestrated well before Walker ever ascended to the throne.

Yet despite the Kochs’ big money and Walker’s behavior as a puppet for the national agenda of union-busting and profit-taking on the backs of working people, and threats to bus thousands of carpetbagging right-wing supporters into Wisconsin for purposes of agitation and antagonism, the anti-union showing has been PALTRY, whereas today’s turnout in support of the educators, students, families and working people of Wisconsin has been estimated at at least 70,000 – with more on the way.

Friends, we must keep up the pressure on Governor Scott Walker, Assembly Speaker Fitzgerald, and the rest of the Republicans locked in step with this misguided and thinly-veiled attempt to wring dollars from the collective coffers.  At this time, more than ever, we must stand in unity to support each other and to support our elected officials who are working to stem the tide of this unrelenting onslaught.

Yet, just as David stood up against Goliath and prevailed when the odds seemed impossible, somehow these lawmakers – the Assembly Democrats, the Senate 14 – and the union leaders, the members and their friends, family and supporters from around the world, have PROVEN to all who are watching that the camaraderie, good will, high spirits and solidarity of the Wisconsin union protestors cannot be bussed in and cannot be bought. As Rachel Maddow explained last night on her TV program, the history of Wisconsin is FOUNDED on a strong labor movement, and IT IS NOT FOR SALE.  After all, our state motto is “Forward,” and that means that there is no turning back. Forward, onward, united, we go.