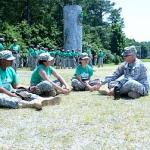 New recruits have long been required to hold a high school diploma or a GED certificate. This requirement is a major impediment to finding enough soldiers to meet annual targets, but even when struggling students barely manage to graduate, the Pentagon has developed a plan to marshal more of them into the military.

The Oregon Department of Education recently endorsed the Oregon National Guard’s Credit Proficiency Program for use in high schools across the state. The program gives juniors and seniors the chance to earn academic credits while training for military service at Oregon National Guard facilities. The program is expected to cut the state’s drop-out rate while increasing the on-time graduation rate. In 2015 Oregon’s 74.8% graduation rate was the third lowest in the country.

Under the program, if a senior in high school realizes a few weeks before graduation that he doesn’t have enough credits to graduate, he could enlist, go to Basic Training and Advanced Individual Training (AIT), and those pesky graduation requirements are satisfied. Some are even allowed to walk with their graduating class.

Juniors may enlist in a split training program by attending Basic Training for 11 weeks in the summer to earn high school credits, returning to school as a senior, graduating, and then attending AIT.

Press reports [1]announcing the Oregon Department of Education’s endorsement of the military program have repeated the blatant lie that “some school systems have taken a stance against allowing military recruiters to be active on their campuses.” There is no record of a single public high school in Oregon that forbids military recruiters. To do so would jeopardize federal funding.

In New Jersey, where students must pass senior year exit exams to graduate, school officials will allow seniors to earn a diploma if they can manage a score of a 31 [2]on the military’s enlistment test, the Armed Services Vocational Aptitude Battery, or ASVAB. A 31 on the ASVAB is the lowest score the Army will allow. It is equivalent to an 8th-grade mastery of English and Math.

“Join the Army;
we’ll make sure you pass,
‘Cause that’s the way
we’ll get your _ss.”

Military planners have long complained that too many high school dropouts were precluded from becoming soldiers. There were 8,000 high school drop outs in New Jersey alone in 2016.  Meanwhile, New Jersey has an 89% on-time graduation rate.  Allowing students to score a 31 on the ASVAB may be expected to help with drop out and graduation rates while significantly lowering standards.

Nationally, the “status dropout rate” stood at 5.9 percent in 2015. The “status dropout rate” is the percentage of 16-to 24-year-olds who are not enrolled in school and have not earned a high school credential (either a diploma or a GED).  This group is of keen interest to the recruiting command. Relaxing high school graduation standards will help to ease the current crisis in recruiting. This is the Pentagon’s game plan in all fifty states.

The Texas Legislature recently passed a law, SB 1843, [3]that requires all high schools in Texas to offer the ASVAB Career Exploration Program, “or a similar vocational aptitude test.” The Army’s recruiting commander in Dallas led the successful lobbying campaign. The alternative aptitude test “must assess aptitude for success without college, be free to administer, require minimal support and training from school faculty, and provide a professional interpretation of the results.” The ASVAB is the only instrument that meets the bill. Soon, nearly all high school students in Texas will be required to take the military’s 3-hour enlistment test.

Recruiters receive ASVAB scores, social security numbers, and detailed demographic information through the administration of the test. At first blush, however, it appears that if the ASVAB becomes an officially mandated testing requirement, “It would mean that the military would be acting as an agent for the school and would thus have to comply with laws protecting pupil privacy (e.g., provisions of FERPA and NCLB/ESEA),” explained Rick Jahnkow of Project YANO [4]in San Diego.  The ASVAB Career Exploration Program, therefore, could only be administered as a graduation requirement if it is given under ASVAB Release Option 8, meaning that results cannot be provided to recruitment services. Otherwise, parents would have to give written permission to release the test data to recruiters.

ASVAB results are currently the only student information leaving American schools without first providing for parental consent. Meanwhile, The Pentagon refuses to sign on to the Student Privacy Pledge [5], an effort to safeguard student privacy regarding the collection, maintenance, and use of student personal information.

Another Texas law, SB 1152 [6]allows high school students to receive up to four excused absences from school when pursuing enlistment in any branch of the armed services and it provides for an additional opportunity to take the ASVAB at Military Entrance Processing Stations.

Chicago Public Schools, the third largest school system in the country with nearly 400,000 students, will withhold high school diplomas unless students have a job, college, or military plans lined up. The program, Learn. Plan. Succeed [7]will require students to meet at least one of the following requirements in addition to regular credit requirements, to graduate:

The last point is problematic.  This horrendous social engineering scheme will disproportionately shepherd black and brown students into military service. For many entrenched in deep poverty, college and “gap-year programs” are out of the question. Job and trade programs are complicated and have limited offerings. Jobs, especially for those lacking essential skills are limited, but the military is always an option and it will soon become a more attractive one in Chicago.

The United States Military Entrance Processing Command is having trouble finding enough recruits so they’ve turned to working with legislators and school officials to approve laws and policies that’ll make it easier to find new soldiers.

Oregon will allow those who cannot graduate to complete coursework through military service. New Jersey will allow kids with abysmal academic records to graduate if they can pass a military exam that requires them to have an 8th-grade education. Texas kids will have to take the military’s enlistment test and they’ll get four excused absences for exploring military careers. In Chicago, even if students meet the academic requirements to graduate, a program requiring additional hoops is likely to funnel large numbers to recruiters.

It’s time for a national discussion on military recruitment, something not likely to happen while the media moguls continue to ignore this important story.   “Look out kid; you’re gonna get hit.” [8]