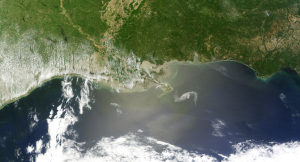 s oil gushes into the Gulf in quantities too large to understand (millions of barrels, with no end in sight), it’s perhaps worth thinking a little about the controlled vocabularies that collate coverage of this and other petroleum disasters. If oil spills, drilling catastrophes, ground seepage, and general pollution are simply part of the oil industry-as-usual, how does starting from the point of the event make these seem like exceptions rather than the rule of dependence on petroleum-based fuels?
Since the BP disaster, news stories in the Proquest Newspapers database have been tagged with general headings likePipelines, Oil spills, and even the evocatively-vague descriptor, Problems. As the books that will inevitably be written enter the Library of Congress, LoC will likely adopt a name heading that will bring together all the works published on this particular disaster. Or not. Books about the Exxon Valdez event are cataloged with the subject heading,Exxon Valdez Oil Spill, Alaska,1989, along with the general heading Oil spills; the Argo Merchant disaster is cataloged with the name of the ship along with the heading Oil spills–Massachusetts; the explosion of Ixtoc 1 the heading Oil blowouts. The headings, like the disasters, go on and on, an ever-growing record of the toxic nature of our reliance on oil.

These headings, though, inaugurate different kinds of inquiries. Putting works about pipeline disasters next to works about pipeline science acknowledges that the two have something to do with each other. To lay pipe at the bottom of the ocean to pump oil miles up to the surface is to cause accidents like the one facing the Gulf today. The event is the rule, not the exception. Grouping works about oil spills together and in GE, for environmental sciences, keeps the spills logically separated from TP, the location for mining engineering.

This isn’t to suggest that some sort of conspiracy separates the petroleum industry from its effects on library shelves–there are logical reasons catalogers put some books about some oil disasters in GE and others in TP or TN. But the headings can be a rich text that reminds us that where we begin our inquiry–at the point of the, or with the industry that produces these events as an essential byproduct of the business plan–has much to do with where we might direct our political energies. Using the classification as a classroom text can help historicize discussion of the current disaster, extending a simple current events lesson into a deeper conversation about the politics of petroleum.